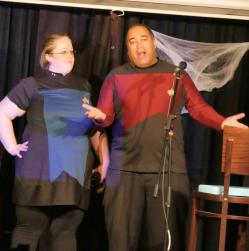 The Dandies were formed by Andie and Velvet Wells in 2010. As of 2017, The Dandies is an eight member ensemble.

Holodeck: An entertainment suite where your imagination comes alive
Follies: A variety spectacle, or a spectacle of mishaps

Each month, The Dandies boldly go where no comedy show has gone before: Holodeck Follies – Canada’s only ninety minute Star Trek parody for Trekkies and non-Trekkies alike!

“In their monthly Holodeck Follies show, The Dandies bring to the table Star trek knowledge to please the most dedicated Trekkie, and improv funny and witty enough to still engage those who are new to Star Trek.

They play original characters of their own creation, with clear roots in the Star Trek franchise (names include Lieutenant Boohoora and Acting-Ensign Weasley Pincher), but their strong character work consistently elevates them above mere impressions of existing Star Trek characters.

Dedicated Holodeck Follies fans delight in returning each month to root for the hapless crew of the USS Albatross, and are rewarded with plot elements and character developments carrying over from one “episode” to the next.” – Elizabeth Rose Morriss

We bring the show to you! We’ve entertained geek fans at the following conventions:

STAR TREK and all related marks, logos and characters are owned by CBS Studios Inc. This website, the promotion thereof and/or any exhibition of material created by the operators of this website are not endorsed or sponsored by or affiliated with CBS/Paramount Pictures or the STAR TREK franchise.
trekprov, toronto star trek comedy, improvisation

“The point of the Holodeck on Star Trek is that we love it even though it constantly malfunctions. Despite some turbulence on the bridge, The Dandies delivered a show that could be described as “engaging.” “ – Ilana Lucas Sept 2, 2015 (from http://www.mooneyontheatre.com/2015/09/03/review-holodeck-follies-the-dandies/)

“Holodeck Follies is more than just a comedy – it’s a skillful demonstration of that most difficult of comedic arts: the parody. It not only pokes good-natured fun at the media it is inspired from but it also elevates it by showing a detailed knowledge of the subject matter at the same time.” John K. Kirk December 3, 2014 (from http://www.popmythology.com/toronto-dandies-holodeck-follies/)

“The Dandies was an enjoyable performance to watch – the troupe was having so much fun of their own on stage, their improv skills were funny and quick, and the crowd, incl me, clearly had a good time.” – Keira Wong Nov. 5, 2014 (from http://keirawong.com/blog/dandies-nerds-guitars-toronto-beam-gig-comedy-review/

Audiences are engaged by The Dandies

The Dandies – The USS Albatross