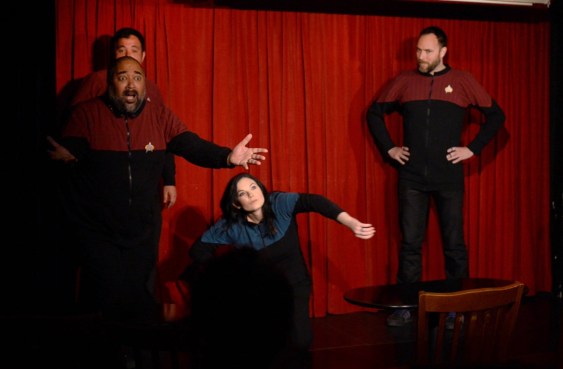 The Dandies have been doing our geek comedy Star Trek spoof for seven years now. But every once in a while, we switch some elements up, giving Holodeck Follies a new feel. Most recently, in honour of Star Trek: Picard coming out soon, we’ve swapped up the crew’s ship, creating a different atmosphere and leading to new challenges.

In The Dandies’ last episode of geek comedy show, Holodeck Follies, we swapped the crew’s ship up. They moved from the Hummingbird – an overlooked ship – to Starfleet’s flagship, the USS Peregrine. This means there will be a whole additional level of scrutiny on the crew as every single admiral in the fleet follow the adventures of the Peregrine.

What the new ship means for the crew in geek comedy show, Holodeck Follies

Now that the crew are on Starfleet’s flagship, they will be sent on some of the organization’s biggest missions. They will be the first ones sent to handle everything from exploratory missions to rescue efforts to mediation attempts. That will bring a whole different set of adventures from the crew’s past efforts often delivering cargo.

We all know how hard it can be to have your boss looking over your shoulder. When you’re the Starfleet flagship though, there are going to be people following your work closely. That means the Holodeck Follies’ crew won’t be able to get away with the amount they have in the past. Now, they are going to have to become more creative about how they handle tricky situations!

3. Pressure to keep the ship nice

We’ve all seen the number of ships Star Trek crews go through. It wouldn’t be a Star Trek movie if the ship wasn’t destroyed. That said, even in a geek comedy show’s world, you can’t go through a flagship on every single mission, so the crew are going to have to keep things clean, polish, and in tact – at least, as much as possible.

With all the shifting demands, the crew is really going to have to step up their games. They are in the biggest, most in-demand positions of their careers. That is going to change everything for them about how they approach their jobs and themselves. This gives great chances for a whole additional level of personal growth.

5. Needing each other more

Now the crew are in the centre of the Starfleet storm and the question is if they can live up to expectations. In order to have any chance of doing that, the crew will have to turn to one another. They will need each other now more than ever. As they watch each others’ backs, expect them to become even more of a family – even if they are sometimes a dysfunctional one.

Looking for more geek comedy in your life? Want to see the way the crew’s new positions play out? Catch Holodeck Follies at Comedy Bar November 9th at 8PM!

There was an error retrieving images from Instagram. An attempt will be remade in a few minutes.