For as long as I can remember, I’ve enjoyed dressing up in costume. When I was younger, dressing up was almost strictly reserved for Halloween; but, fortunately, cosplay has become so popular, trick-or-treating is almost the last reason to get dressed up these days. As well as dressing up for geek comedy with The Dandies, I’ve been making costumes and dressing up for conventions and costume parties for quite some time. Over the years I’ve collected quite a few things in my Tickle Trunk – here are just a few of my cosplay props. 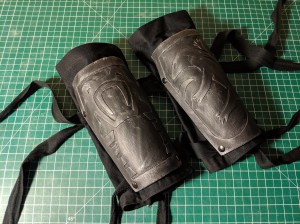 I grew up with the G.I. Joe, both on TV and in comic form. The ongoing battle between good and evil, G.I. and Cobra definitely helped shape my childhood. One thing that always fascinated me about the Joe universe was that it was, at least initially, a realistic military setting, but with ninjas thrown in. I know I’m not the only kid who thought ninjas were cool; heck, I’m not the only adult who thinks ninjas are cool. I wanted to create a costume that had a modern feel, but also included some throw-back to the legendary ninja, so I created these bracers that are meant to look old, as if they were handed down from one master to the next. On one is the classic Cobra emblem, and on the other, a monitor lizard representing a personal ninja clan. I made these out of Worbla, a thermoplastic that is specifically for making costume armour. I painted them matte black and used some silver to make them look aged and worn; they were my first Worbla project and I’m pretty happy with how they turned out.

Star Wars is rife with cybernetic replacements and augmentations – with all those lightsabers around, it’s a given some folks are going to have their hand(s) chopped off. In the Star Wars universe, this wrist augmentation supports a damaged forearm, houses some communication and computational equipment, as well as administers healing bacteria, alertness chemicals and pain suppressors – everything a Sith needs for a long mission hunting Jedi. In real life, two speaker brackets support some cardboard wrapped in vinyl and some IKEA fairy lights mounted behind some coloured windows. I think any time you can add some glowy bits to a costume it really ups your game. This is the second and far superior version of this piece (the first one only had two lonely lights) and I think it really brings this costume to life.

Anyone looking to add that next level of impact to a geek comedy or cosplay costume should check out some costume lenses, if their eyes are comfortable with them. Not everyone can wear lenses, but I’ve been wearing prescription lenses for almost 20 years, so slipping in a pair of these comes pretty naturally. Coloured contacts are pretty common these days and yet I still get people who are blown away when they look me in the eye. Whenever I’m coming up with a new costume, I always look for a way to incorporate a pair of contact lenses for that extra wow factor.

You’ve probably noticed by now that I like to dress as the bad guys – this prop I made for my lich costume definitely has an evil vibe going for it. For the uninitiated, a lich is a powerful sorcerer who has cheated death through some Faustian bargain with the Powers of EvilTM, giving up their humanity in exchange for ultimate power and immortality. As an undead of the highest order, a lich’s motif is generally skulls and bones so I wanted to make a piece of armour that was appropriately menacing. I used some Halloween toy scythe blades for the spikes, covered them in foam pipe insulation that I carved into boney fingers, painted them, and mounted each of them on to a shoulder-piece made of vinyl and cardboard. +2 to Intelligence and Armour Class.

“This is the weapon of a Jedi Knight. Not as clumsy or as random as a blaster. An elegant weapon… for a more civilized age.” – Obi-Wan Kenobi

One part costume prop, one part mantelpiece ornament, one part toy; this lightsaber, much like the lightsabers in the Star Wars films, has a bit of a story behind it. Sadly it didn’t once belong to a great Jedi Master or Sith Lord, but it was purchased using money I made from selling my collection of Dungeons & Dragons books – a collection I accumulated as a teenager by trading Magic: The Gathering cards with the Silver Snail for store credit. Teenage me would never have guessed he was investing in his own nerdy future when trading up for Elder Dragon Legends and other rare Magic cards in the hallways of my high school. The hilt of my lightsaber is made of aircraft aluminum and is a custom design using modular parts from SaberForge that were assembled by my friend at Acme Sabers, who also installed the electronics. The lightsaber contains a circuit called a Nano Biscotte, which allows individual control over the red, green & blue LEDs so you can make the blade any colour you wish. It also plays all the sounds you would expect. The hilt has an accelerometer so it knows to vwooom when you swing it and the blade flashes on impact. Lastly, it’s combat ready and can stand up to a full contact duel. I constantly look for reasons to wear it on my belt and show it off.

I hope you enjoyed my list of favorite props that I use outside geek comedy. What’s something in your Tickle Trunk or costume closet that you love? Let us know in the comments!

Want to learn more about The Dandies’ geek comedy costumes?

See how Andie takes a piece from idea to completion!