“The Romulans and the Bov have trapped the crew of the USS Hummingbird. How will they keep their resolutions now?”

Canada’s only spontaneous Star Trek show returns! The Dandies have moved the show to prime comedy time at Comedy Bar – the second Saturday each month.

The Dandies create a new Star Trek episode on the spot! 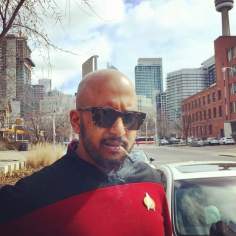 For our Trekkies and Holodeck Follies fans: The action continues

The season five finale episode ended on a cliffhanger with the crew of the USS Hummingbird facing two deadly rivals. You’ll be on the edge of your seats as the improvised drama and adventure continues in the season six opening episode.

Morgan George: a veteran sketch and improv comedian, Morgan has broadened his focus to include stand-up.

“The Dandies delivered a show that could be described as ‘engaging’.” – Ilana Lucas, Mooney on Theatre

The emotional intelligence of the crew of the USS Hummingbird comes into question as 9 of 10 wrestles with her newfound ability to feel. Meanwhile, the Bov – a biped bovine race that seemed innocuous – poisoned the crew and hijacked the ship. Hurtling to Earth using the new SMORE drive, they seem intent on galactic domination. The Romulans have come to help but things go awry.

We were treated to non-Trekkie jokes from comedians Hisham Kelati and Jennifer McAuliffe, and music from Xave Ruth.

The Dandies boldly go where no one has gone before: Holodeck Follies – Canada’s only Star Trek parody for Trekkies and non-Trekkies alike! The Dandies improvise a new Star Trek episode based on audience suggestion and interaction.

Note: this venue is not fully accessible. There is an outdoor and indoor flight of stairs to the venue. However, the washrooms and stages are all on the same floor.