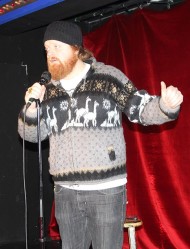 Garrett Jamieson is one of our favourite Toronto comedians. Garrett’s sense of humour isn’t negative or malicious — he is wonderfully irreverent, almost daring the audience to stop him from making dirty jokes. Garrett has supported The Dandies from the beginning. Here is a world-class stand-up comedian — he literally travels the world (with heavy metal bands, no less) who makes time for our geeky Star Trek show.

His past sets at Holodeck Follies have brought out some great chestnuts, puns, improvised audience moments, and new material. Without fail, he leaves the audience cheering for more. When we contacted him in August, he was preparing for his tour to Europe but agreed, without hesitation, to come aboard as our first-ever master of ceremonies for our annual fundraiser show!

When he’s not travelling the world, or opening for Reggie Watts (NXNE), he’s a wildman in Tree Planters, a CBC Comedy Coup submission. When asked if he was more Trekkie or Doctor Who, Garrett answered in favour of the Galafreyan.

On November 1st, join Toronto’s brightest comedians and musicians in a night of comedy for a good cause: Close Shave 3 – A Movember Fundraiser in Three Acts.

Get to know Garrett Jamieson on Twitter (@GJpartydrugs); he shares funny photos and updates on his world tour. Also, check out this video of him on the streets of Toronto: