When I watched TNG for the first time, I enjoyed watching Lt. Reginald Barclay as a comic relief character. After all, he was played by the delightful Dwight Schultz of A-Team fame. I didn’t mind that he got into ridiculous situations but I was sad that his nickname, Lt. Broccoli, didn’t stick, even colloquially, among the lower staff.

In watching TNG for the second time, I was less entertained and more annoyed that Barclay couldn’t just get better.

Recently, we watched the VOY episode, “Pathfinder”, and I changed my mind on the importance of the Barclay character in a scifi show.

Barclay is the embodiment of an important exploration: the inner, often harder, journey out of (and despite) fear into living. His journey represents acts bravery through his life that hadn’t occured to me in my younger years, and likely won’t occur to many reading this entry.

After the jump, I will share the fear that paralyzed me and how I fought through it to save the day.

I live with a body dysmorphic disorder since I was twelve. At that age, I believed I was the size I am now. No matter what the mirror or pictures said, I was fat. I don’t pretend I’ve led the healthiest life but my self-image has ballooned more than I have in reality.

I shared that to say this: the idea of going to the beach with my kids mortified me.

Specifically, the idea of being in the water without a shirt shut me down. I felt that, even though others may do it, and might possibly be bigger, that no one deserved to look at me.

I’ve seen (and championed) the bikini body movement for others, but didn’t believe I counted in that same way. I made poor eating choices, afterall, and men aren’t supposed to care.

In the last few years, I avoided the beach and pools or stayed as far back as I could. It hurt my heart to be stuck and to miss out connecting with my kids and Andie.

Today, that familiar feeling came back. I brooked an internal compromise and went into the water up to my knees. I had my phone with me, a justification for needing to return to land rather than venture further. And there I stood on the beach, near tears, as everyone else was literally too far away for me.

As I struggled to settle for being on the beach on a lovely day, I thought again of fear-riddled Reggie. For all of his verbal obstacles, he was still a man of action. When he was suffering from his fear of transporters (with reason it turned out) in Realm of Fear, he acted to not only save himself but save other crewmembers.

My family wasn’t in danger, and even my relationship with them would have been okay, but I was tired of letting fear win. I could feel the emotions run through me. They sought to keep me stuck but I put my phone away.

I took a look around to see if anyone was waiting to call Red Alert! I removed my shirt but no klaxxons rang. No one came up and begged me to think of the children. I strode to the shoreline, eyes down in case they changed their minds. I let yes-and philosophy overpower my fear but I was still managing my shame.

I should have mentioned that the water was cold. I am not a fan of cold but I was less a fan of losing the opportunity. Step by step I moved through inbound waves, letting the water and my family’s encouragement be my focus. Half way to my family, the tears on my cheeks would have been apparent to any close enough to see. The water was half way up my body and I almost turned back.

Andie has known my challenge; she waved and smiled. I sank into the water and committed fully to my forward motion. My fiancées playfulness was comforting, distracting, and brought me into the moment. My kids were unaware of my struggle and were just enjoying my presence. We played and joked as we slowly moved toward the shore.

I didn’t stay in the water long (maybe 20 minutes)… none of us forgot how cold it was. When we came out of the water, my fears returned but, surrounded by my family, my shields remained intact enough that I sun-dried myself. 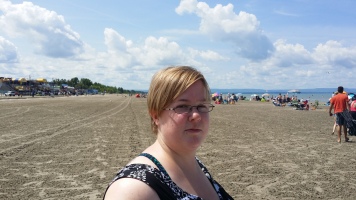 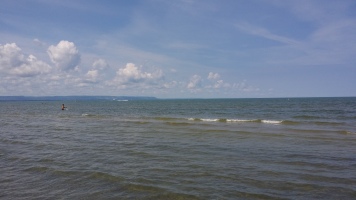 Like Reggie, I am on the other side of my fear firewalk. I survived and gained some self-pride. But both of us know that one situation won’t be enough.

Sharing this truth so publicly makes it easier for me to continue to move forward in the light. I can’t heal this alone, but I no longer want that burden. I am tired of letting fear keep this part of me shrouded in secret, out of shame,
I am ready to be the pathfinder to my happiness on the other side of the realm of fear.