No Star Trek show would be complete without communicator badges? (that’s right, I basically said the Original Series is incomplete. 😛 TNG FOR-EVAH!)

While we may not appear on stage in full costume, we do have communicator badges. 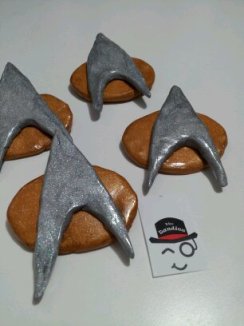 I made the communicator badges out of polymer clay, which makes them really easy to make, but also somewhat fragile. Being the crazy crew of the USS Albatross, we have had some mishaps with the badges and I’ve had to make some extras as back up. Guy Guyson broke his while dying one time. Captain Field and I broke ours while killing Guyson…ahem…I mean coming to his aid all too late. I’ve had to switch up the adhesive that holds them together to make them more durable. I started off using hot glue and now use contact cement, which is much better at holding them together.

Of course, I fully expect to have to replace them several more times, because the Albatross can be a dangerous place.

Look how cute we are with our badges: