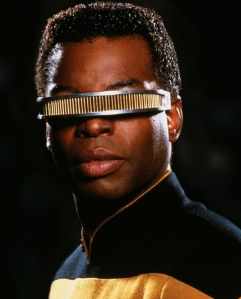 I grew up knowing LeVar Burton’s name because of Alex Haley’s Roots mini-series. Admittedly I don’t remember much about the series itself, just the emphatic repetition of “My name is Kunta Kinte!” and the whipmarks earned for staying true to oneself. When I first heard about the new Star Trek (TNG), I was happy to see LeVar Burton, as the sole familiar name (to me) in the cast.

I didn’t watch Reading Rainbow but I know it was a wildly successful and culturally relevant program, so I guess I can understand why some people (like the Troy Barnes character on Community) would be agog in meeting their literacy hero.

A couple of years ago, we were in the audience when the cast of TNG gathered to reminisce. While everyone on stage was comfortable with who they were, LeVar came across as the most charming and grounded person in the room. It is nice to see such a successful performer be assured yet approachable. Michael Dorn was there as well, being teased as much as teasing back. The love and camaraderie was wonderful to witness. 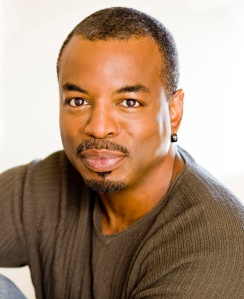 LeVar Burton’s first professional role was Roots and, at the time that they cast Star Trek: TNG, he had a more brand recognition than Patrick Stewart. LeVar’s character, Geordi La Forge, rose quickly through the ranks (Lt. JG through to Captain) and with good reasons. La Forge was a brilliant engineer, he had a way with words, knew how to command/negotiate/play-well-with others, and he was dedicated in making the world a better place (aka they didn’t write many romantic plots for him).

More than most other characters on the series, La Forge represented the Nice Guy, the type of guy you would want as a brother, a friend, a partner (but not in crime). He acted for what was right but he wasn’t annoying about it. He would help everyone, even Lt Barclay — eventually.

La Forge was a socially accepted minority — he was blind but the solution also made him a socially accepted trans-human. He was not portrayed as weak for requiring assistance with his sight. Ironically Burton had issues wearing the prop (VISOR) that made enhanced his character’s sight. Like many Star Trek devices, Geordi’s VISOR is moving from sci-fi to reality.

So, here’s to LeVar Burton for playing a great character that helped us feel the future (and space) could be a positive.