I am excited to include Ingrid & Steve in our Dandiversary party lineup but I was at a loss for viable images to share of them. Both performers are wicked in their artistic ways but it is difficult to find them online. 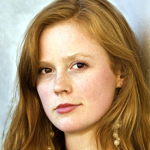 Ingrid Hansen is a bonafide renaissance woman. She co-created SNAFU Dance Theatre, she toured her successful solo show (Little Orange Man) across Canada, she teaches movement, acting, puppetry, viewpoints and dance for children and adults. She designed costumes for the Dora-Nominated musical Ride the Cyclone, and worked for four seasons as a puppeteer on the children’s television series Tiga Talk! on APTN.

Steve Chmilar is a bonafide renaissance man. He has a full collection of oil paintings, drawings in pen and graphite. And it is beautiful work. Seriously, go look, we’ll wait. Steve sings — hard. He had two full length albums under his belt (with “the Villains”) before his latest rocking CD, Fall of the Villains, was released.

I met Ingrid and Steve as a musical duo when they were guest performers for my other improv troupe, Special Features. They are charming, fun, and entertaining as a musical duo! They love to twist heavy rock songs into melodic masterpieces. For example:

I’m not sure what songs they will mash-up at the Black Swan Tavern on February 5th but I know it will be dandy.